Hey guys, now i know not technically kei id hope its close enough to make a post about.
I would like to keep track of what i do to this car so i thought a forum post would be more fun than simply taking photos!
Its something i wish i had done to my other car but never actually got around to it.
If i have done something wrong or posted in wrong sections ect just let me know

I purchased this car maybe 2 months ago now, Had been looking at them throughout the year and used the none existent snow and winter months as an excuse to go and buy one !
My plan for this post is to be open about everything ive nothing to hide

So i found a "clean" looking Daihatsu Cuore L501 that didn't sell on auction and i asked for a price.
Th[/b]e car has over 90k miles on it so i wasnt paying alot for it.
No service history
No drive before i brought it
Never seen it in the flesh
Its got rust
Its got issues
But i love it
I literally arrived and left with it about 10 minuets later.
Wobbles like fuck at 65-75 i know these cars arent built for it but its all good and for the record i somehow managed 85 in it!! Private Closed Road obviously

I travelled down to Southampton to fetch the car unseen from a very vague Ebay advert, i live in Nottingham so its a good 180 mile journey there.
Everything checked out and off i went! the owner was kind enough to leave me half a tank of fuel and a rave cd from the 90s.
Luckily it had a head unit i could plug my phone into and the long, sketchy motorway ride was accompanied by Rise Against and various other stuff.

About 40 miles in i stopped off at a services to fill up, Better now than never. Cost me a measly £23 pound! I was well chuffed. Not used to getting change out of £70 for a tank. The millage of this cars petrol tank confuses me somewhat however im not sure what it is but i feel like i should be getting more out of my tank than i do, or maybe its because i primarily travel over 60mph to get to work and back... anyway the car made it back home in once piece, nothing broke or died or fell off and all was good.


The term build is subjective to how long i actually own the car, but i shall continue with it into the foreseeable future

My original idea was to use this car over the winter and continue with my other build this year, my plans have changed and i shall be sticking with this car for a little longer until i have sorted plans for my next car.


Sooo hopefully this will be updated often enough, as always all comes down to money and time but ill try my hardest.


To start heres a picture of the car a few days after i brought it.
Safe to say some of the lads at college were confused as to why i was now in a little egg box car and not the Jetta :')
I have already had so much shit for buying this car it is unbelievable ! Everyone asking me why i sold my other car why are you in that shit box. They dont understand the appeal of these little cars 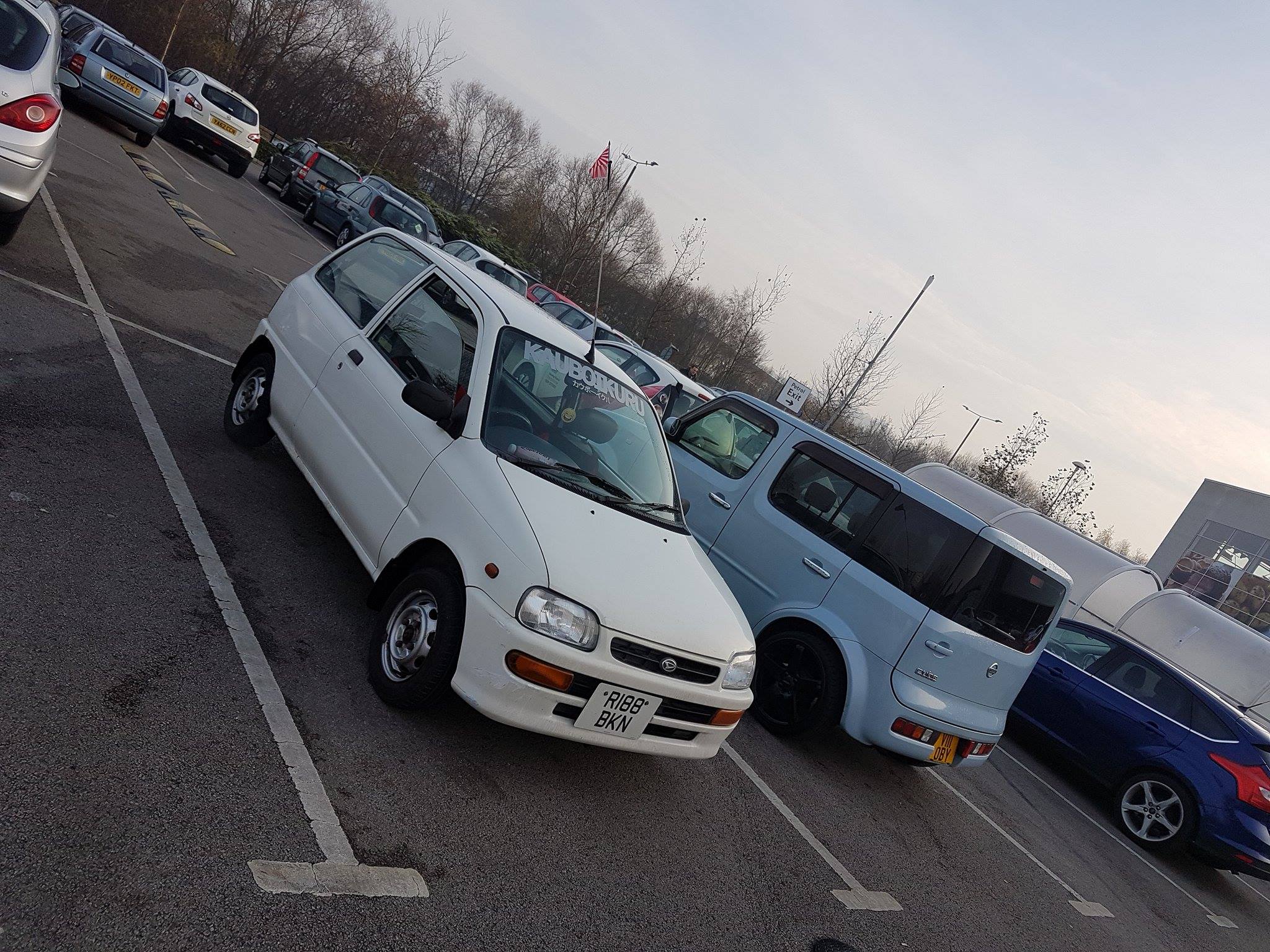 Nothing really to tell other than i found a Cube and took a picture.

So the first thing for me obviously is Suspension, its way too high for my liking and i know the difficulty and expensiveness of acquiring coil overs amongst many things iv come to find on these cars, 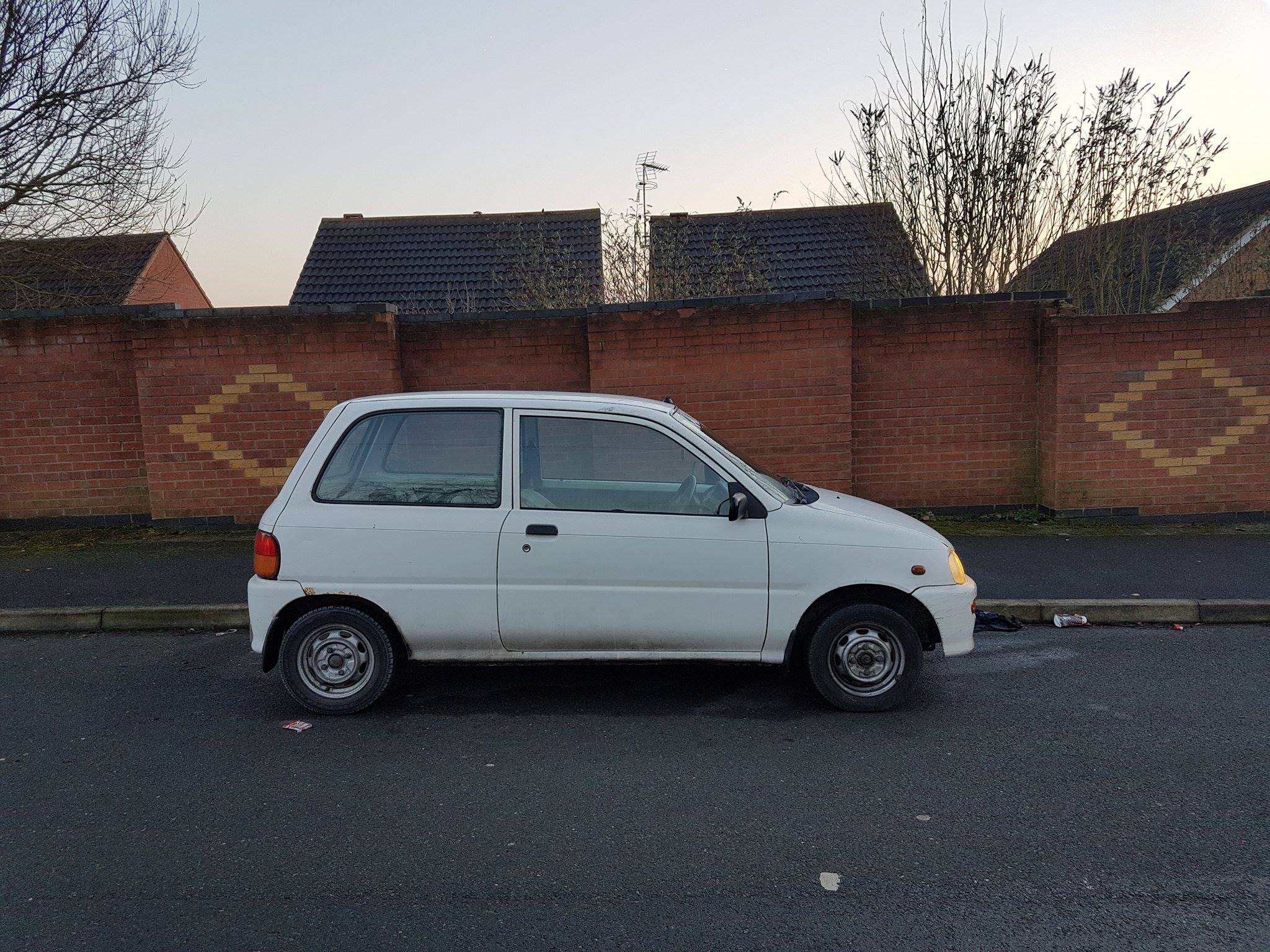 so i have been speaking to some people and apparently Corsa B front coilovers should fit with some modification so thats what im currently working on.

Also i had a MK1 Golf Duckbill spoiler laying about, i put on to see what it would look like.... Yes i took it swiftly off, it was way too big and looked ridiculous on a otherwise standard Cuore 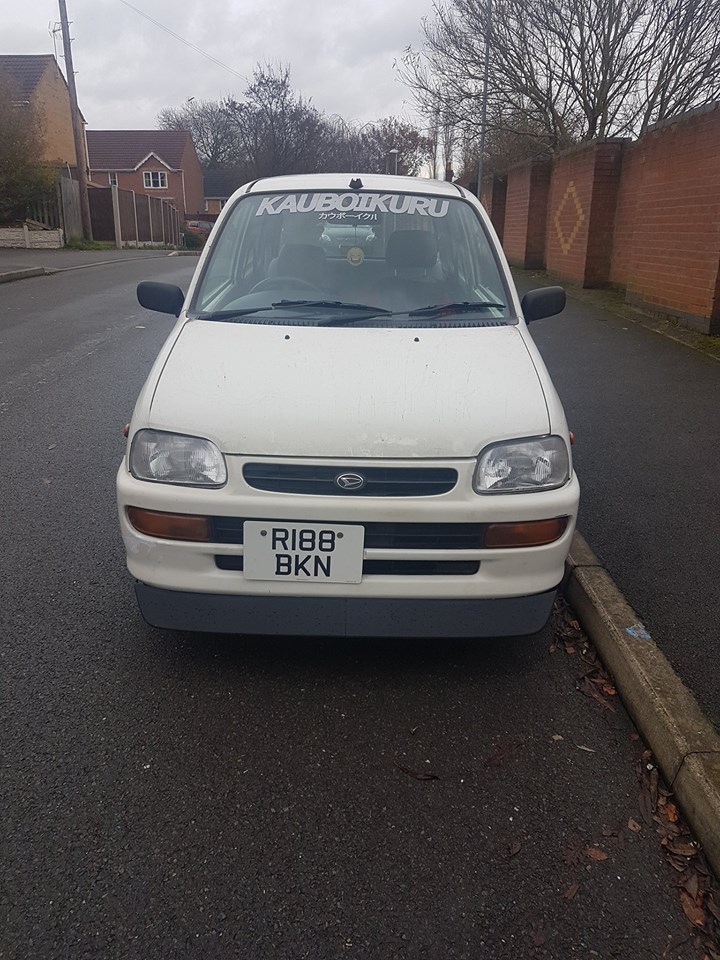 What made me laugh when i removed the bumper however is the lack of reinforcement in these cars! And yet they hold up surprisingly well to accidents. 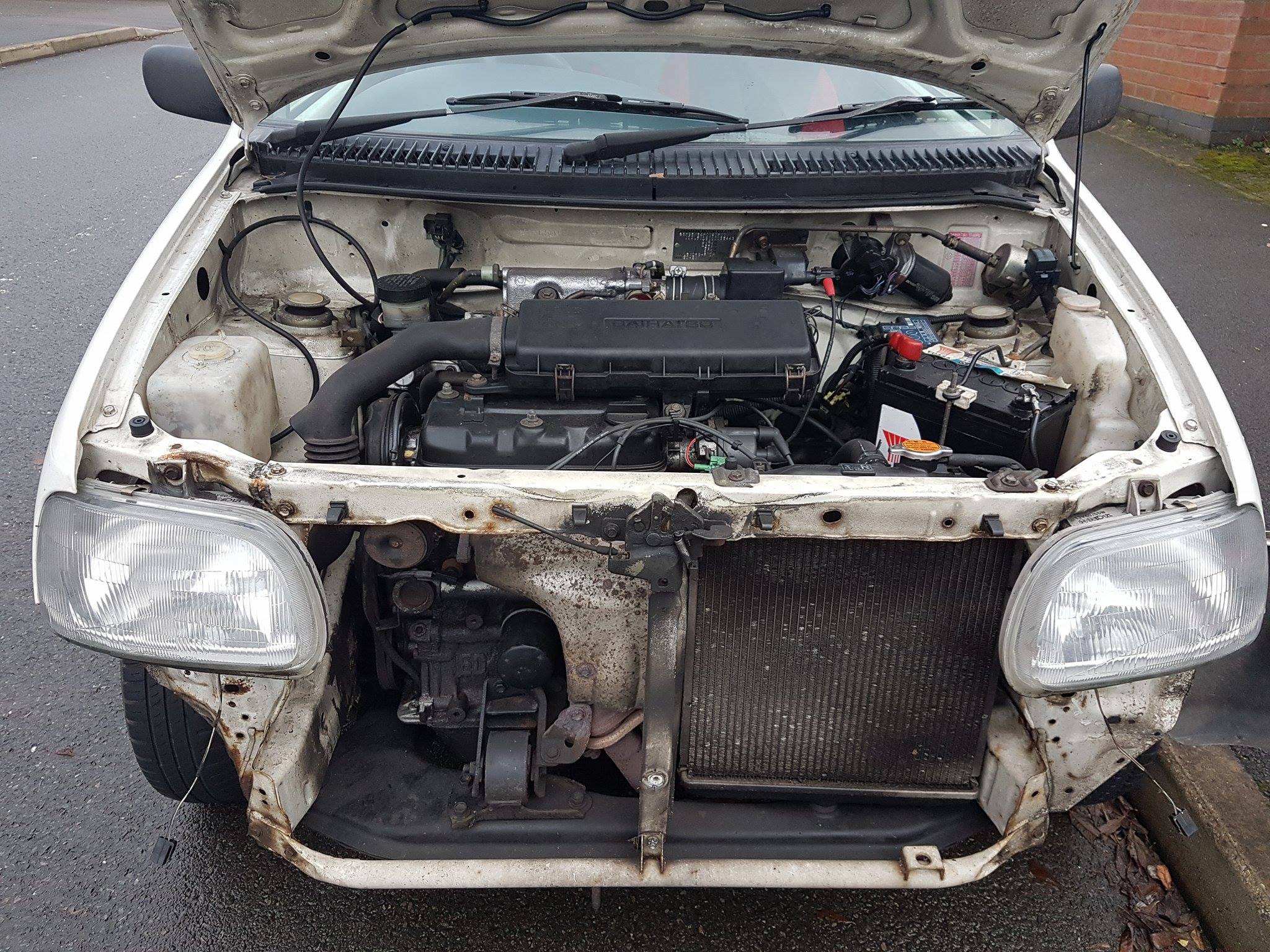 Now engine wise, this is no 660cc turbo, its not a 1.0, its a nice little 850cc 3cyl ED20 engine. Revs alot, and im not going to lie it sounds pretty good for what it is too. But 42BHP is a bit lacking for me. Ive had a few ideas running about in my mind, but as its a daily car i cant really do too much as i need the car. Thought about modifying a 3cyl motorbike itb's and deleting all catalycs but its all ideas and probably not going to be followed up. Ive spoke to a guy off here i think if he is successful in his mission i could acquire his old engine, and also some nice looking wheels too

Oh the wheels... ive grown to hate the 4x110 PCD and wide Centrebore these cars have. Finding wheels that fit are like a needle in a haystack.

Sooo i know someone who put some old ford wheels on his L501 in Finland and he has helped me out quite a bit with these cars in general really. So i thought id do the same ( not the same wheels as him though i always try to be different)

I first tried on a friends 14" steel wheel off a fiesta to see if it would fit. It looked relatively promising.

The PCD should be just close enough to be able to make them fit on the Cuore with the help of Wobble bolts and machining the CB to 66.1 to fit the Cuore's larger hubs.

Once i know they will fit i will then refurb them and get some tires on !
Anyone got any ideas about colours?? Would be greatly appreciated.
As you can see the 6j Et 19 poke quite a bit, so some archwork/camber/boltons might be needed. But ill cross that when i come too it.
And if push comes to shove i can sell the wheels as they didn't cost me anything really. I like them ! they look nice and retro. 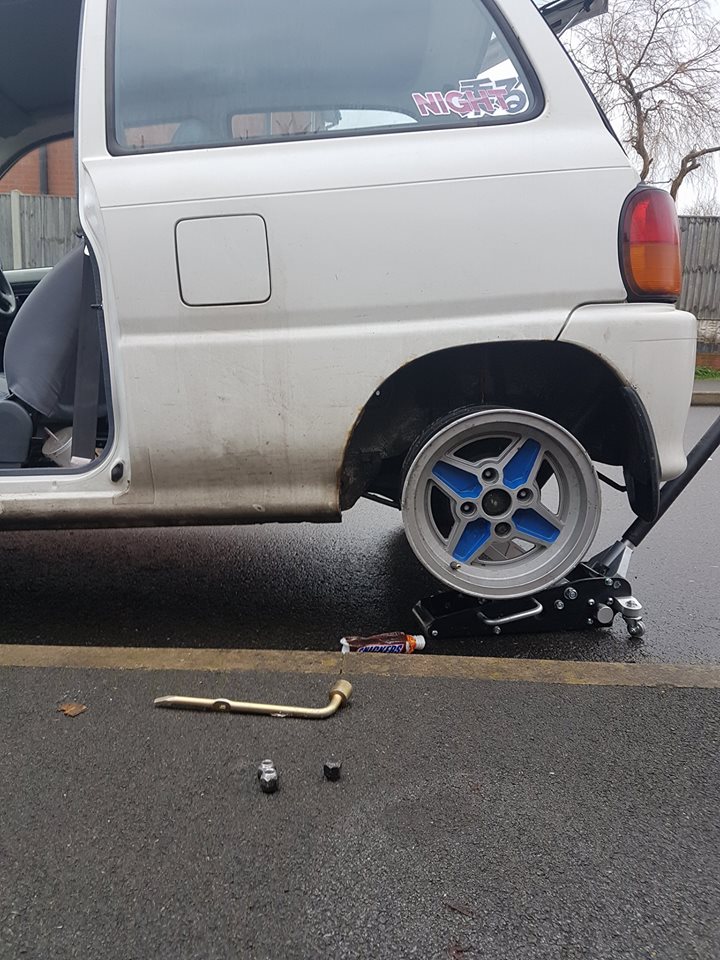 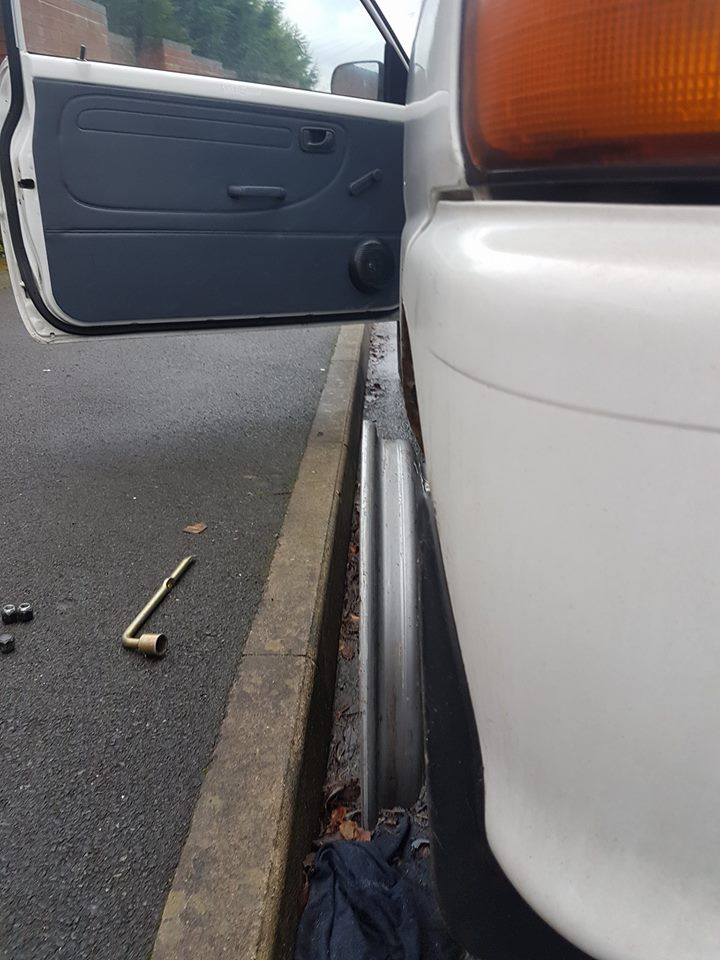 I will go down to a local machining shop when i can and have them widen the CB, i was going to do it myself but i want a good job!

Along with that small write up i have also Completely removed all rear seats, carpets trims revealing some quality previous repairs and a bit of rust that needs to be sorted before it gets worse. No big issue.
Removed the back box and first silencer from the exhaust for a bit of sound obviously no performance game just placebo effect that im going a million miles an hour now apposed to 30 and changed the headlight bulbs and side lights and apart from that not much else. I'll carry out a service/discs pads ect.

So my next course of action after the wheels ofcourse is;
Lower/coilovers/Chopsprings??
Clear lense headlights from the mira
Black the front and rear bumpers
Red tint the rear lights
smaller plates
remove headliner ect
Avanzato seats? i has a bucket seat and harness(thats actually how i got the ford wheels;) but i couldnt be arsed to make a bracket up :')
See how difficult it would be to remove the aerial as mine is broken anyway.
Im going to sort another front splitter out and some sideskirts too.
Civic EG spoiler ??
Then down the line paint it... im thinking a odd colour maybe Teal?
Possibly an engine swap.

But thats all for now guys! Please be gentle, this is my first post and if anyone actually read this far then thanks for taking an interest and i hope to keep your attention for whatever ends up happening next.

Keep up the good work. People don't realise how much fun a little car can be.

Just a little update.
I have taken my Ford Capri wheels to a local machining shop to have the centre-bore milled out too fit the Hatsu'
Ive used wobble nuts also but i know someone who has not so that is a bit confusing!
Anyway this is how they look and im happy with it! I might not even paint them!
Just need some lows now... 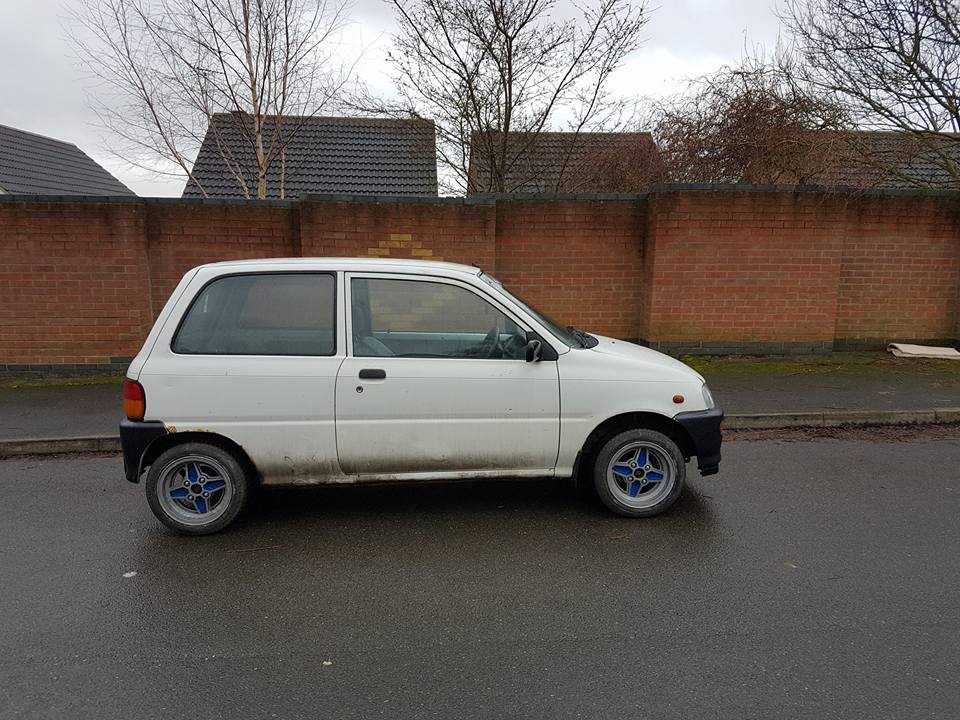 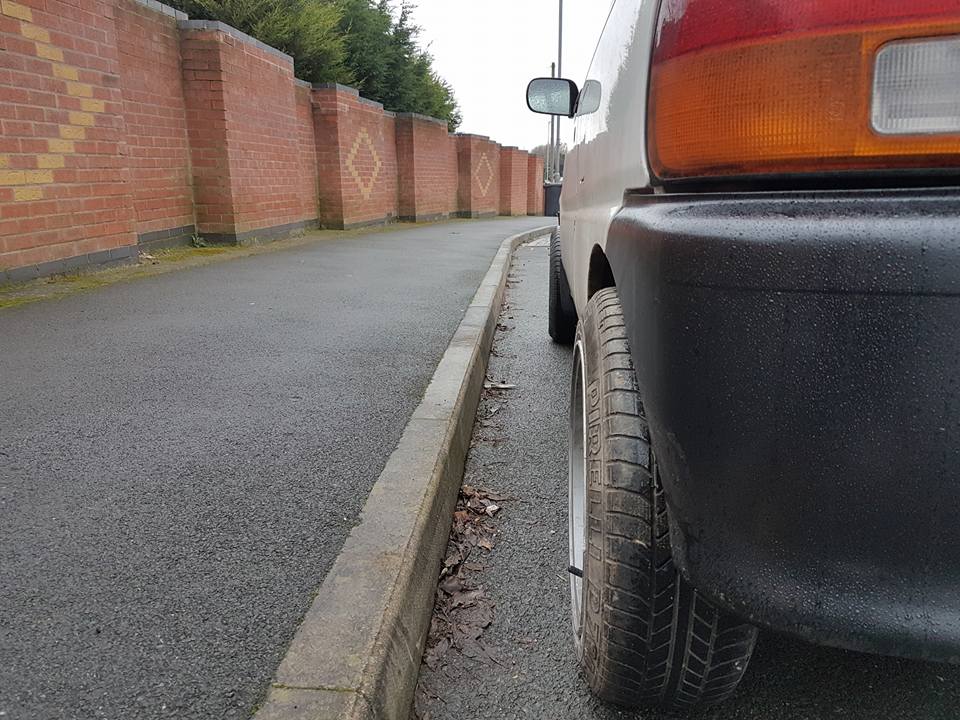 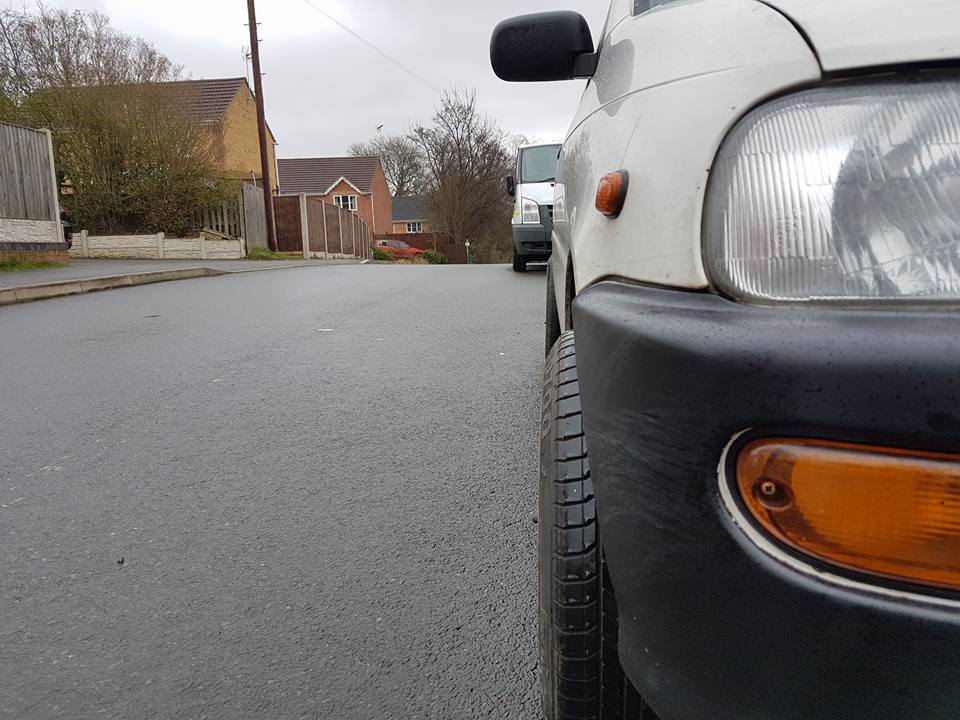 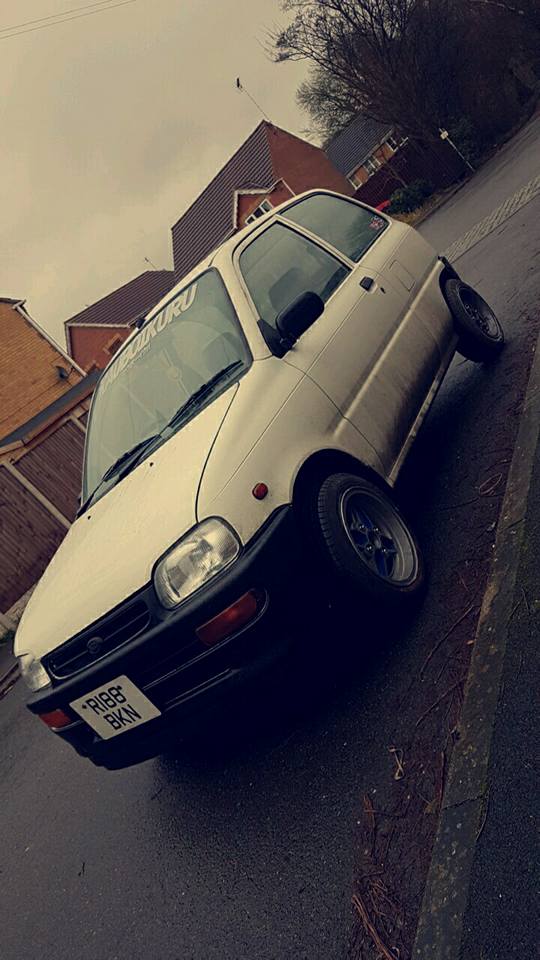 Depending on your budget you can speak to GAZ suspension and get some custom coilovers up front and springs and shocks in the rear ??

Gave it somewhat of a clean today and took a couple more pictures.
And i might ring them up to see how much thoese custom coilovers would be. But i dont really want to spend 3x the amount the cars worth. No harm in getting a quote tho cheers for the information! 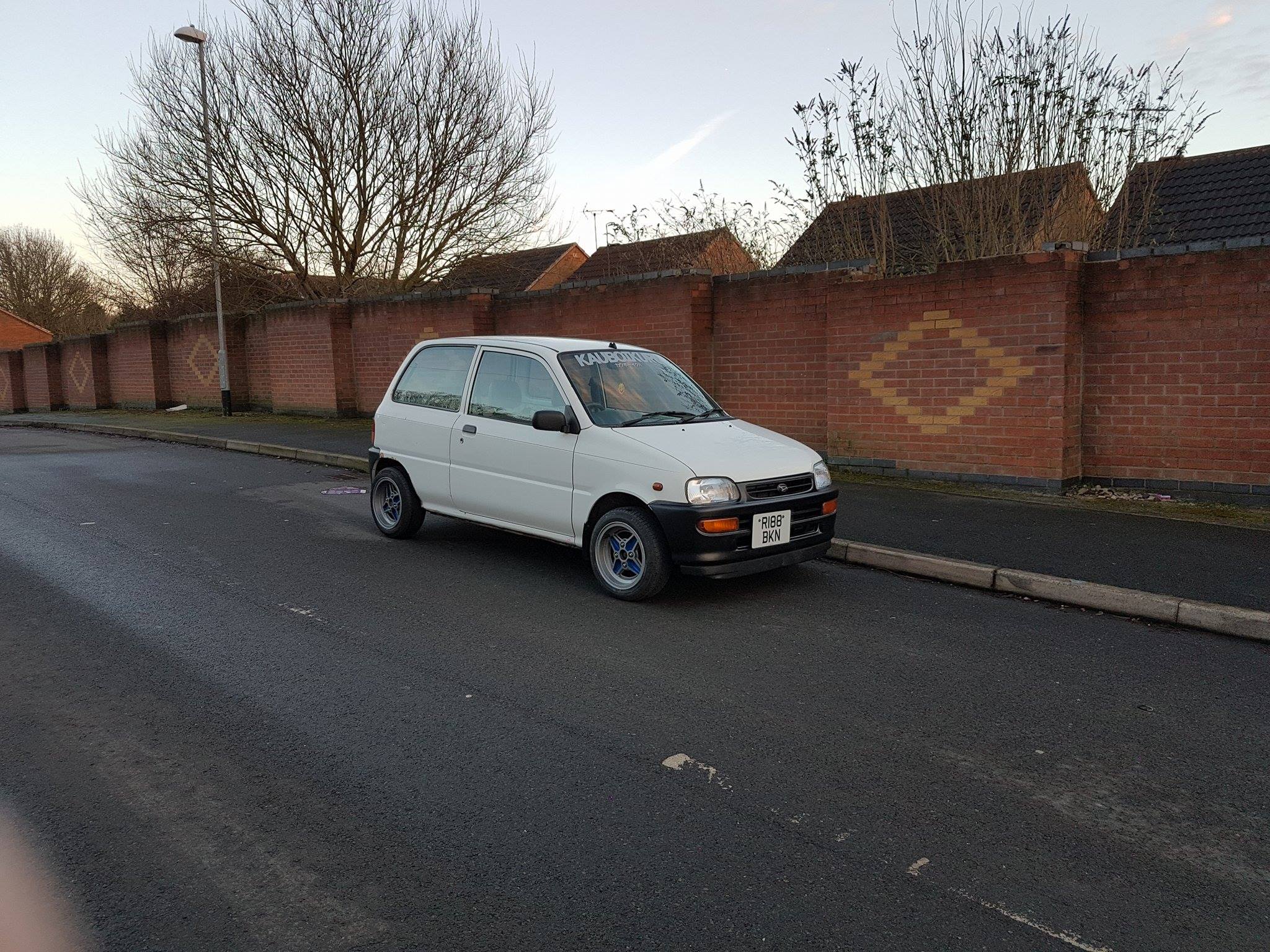 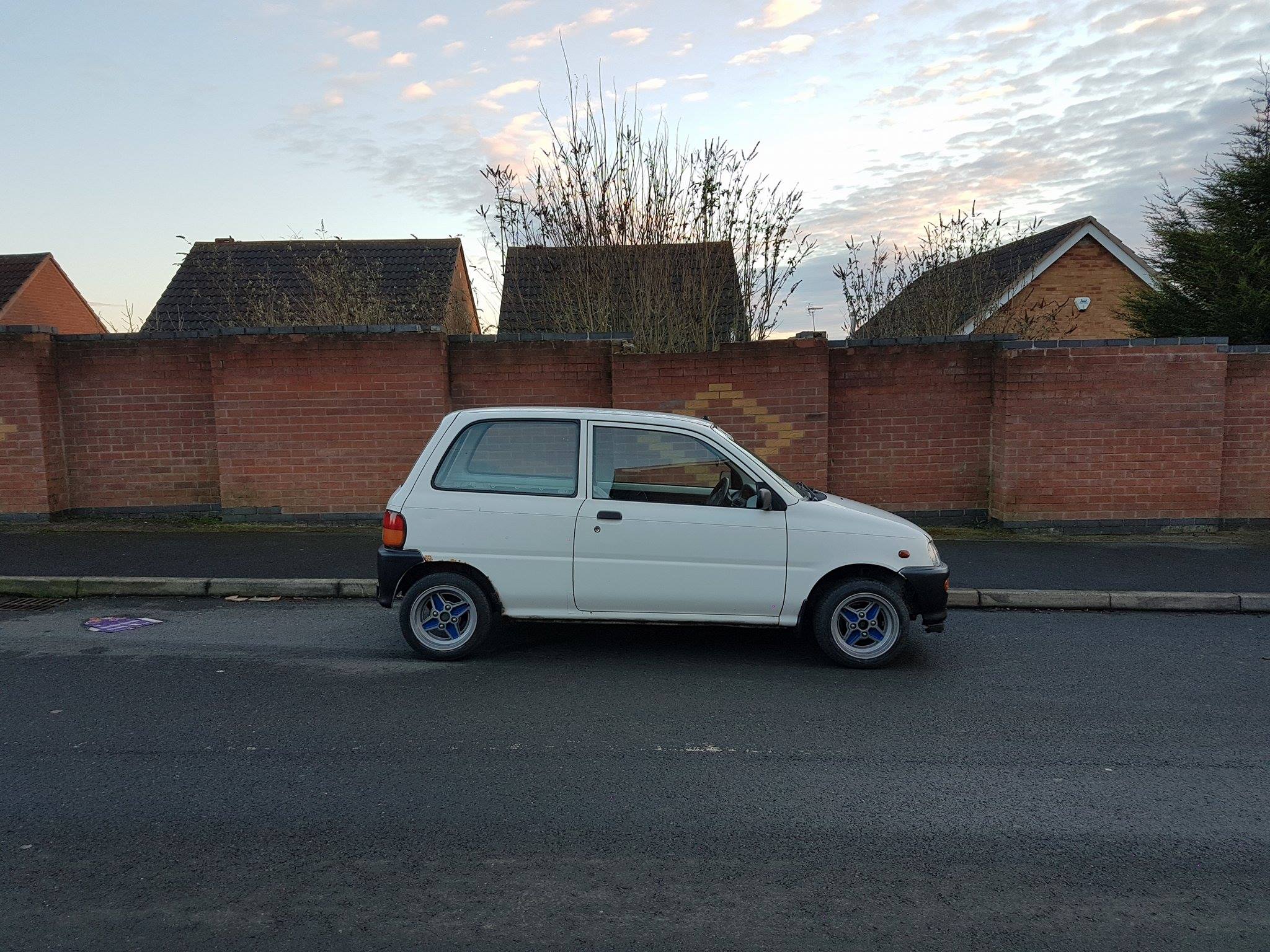 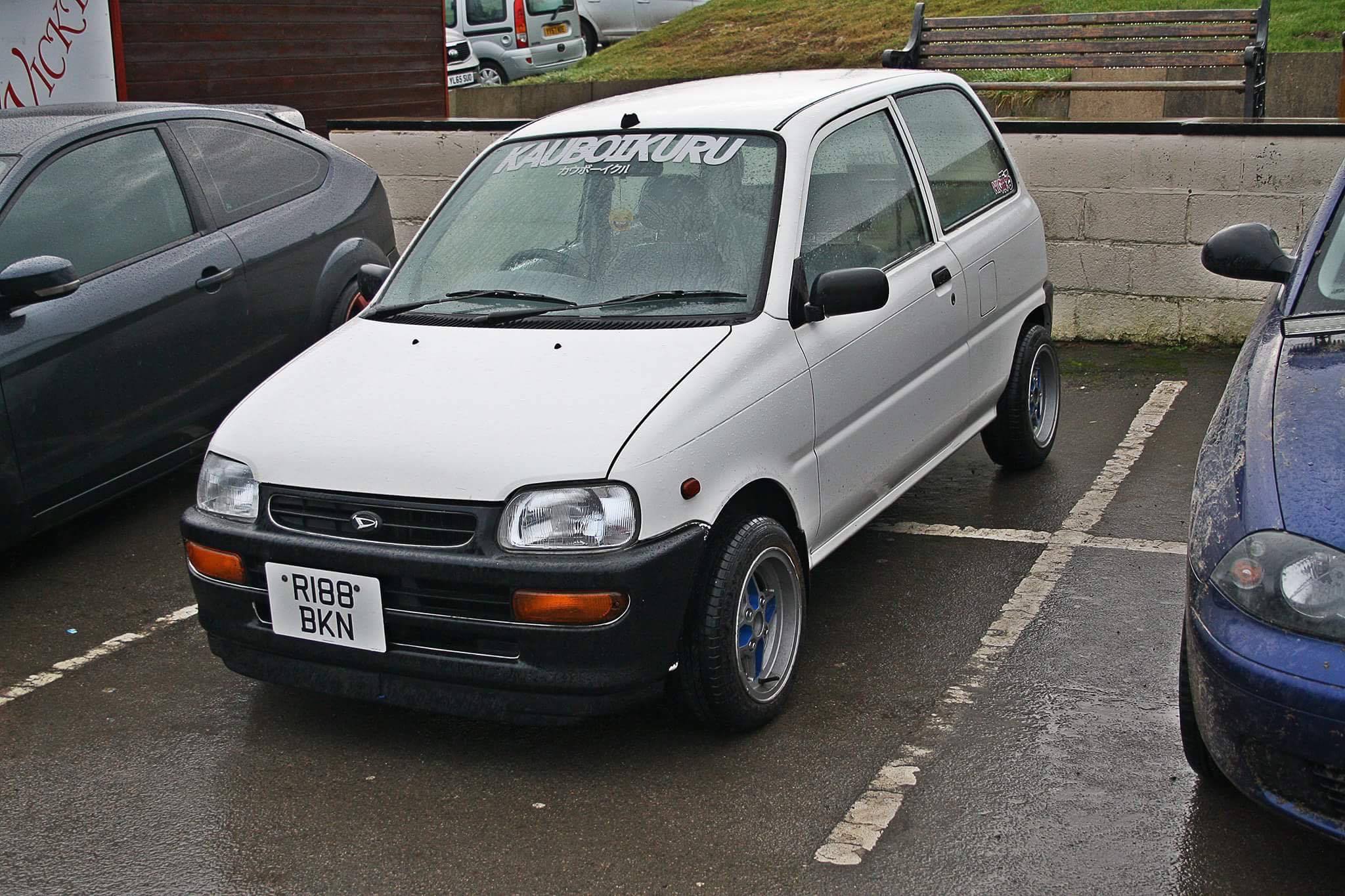 I need my car this low!! (Achieved by putting four humans in the back :') 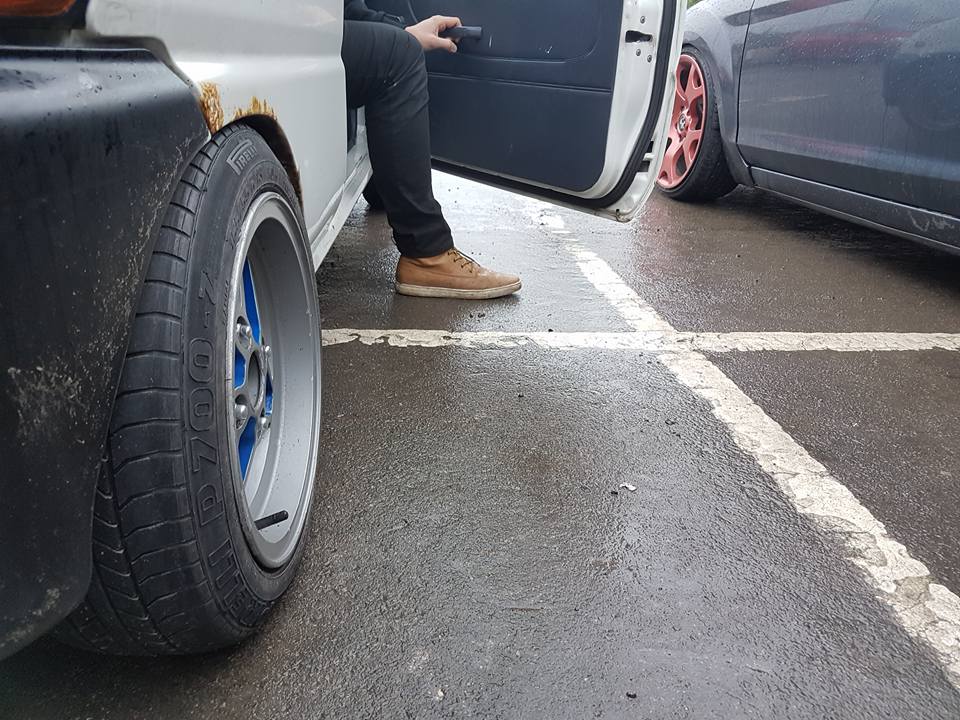 So i brought some coilovers for the Cuore, Just need to make them fit and it should be fine... Grind a bit off the hub no big deal 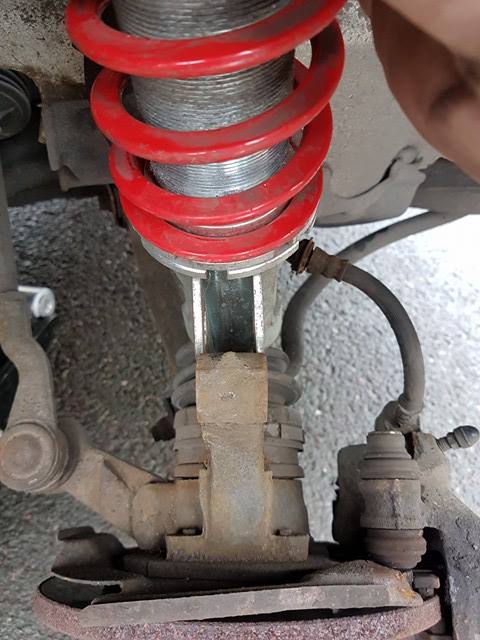 Also been to a few meets, got some pictures took of the little Egg Box, i should have cleaned it now that i think about it... 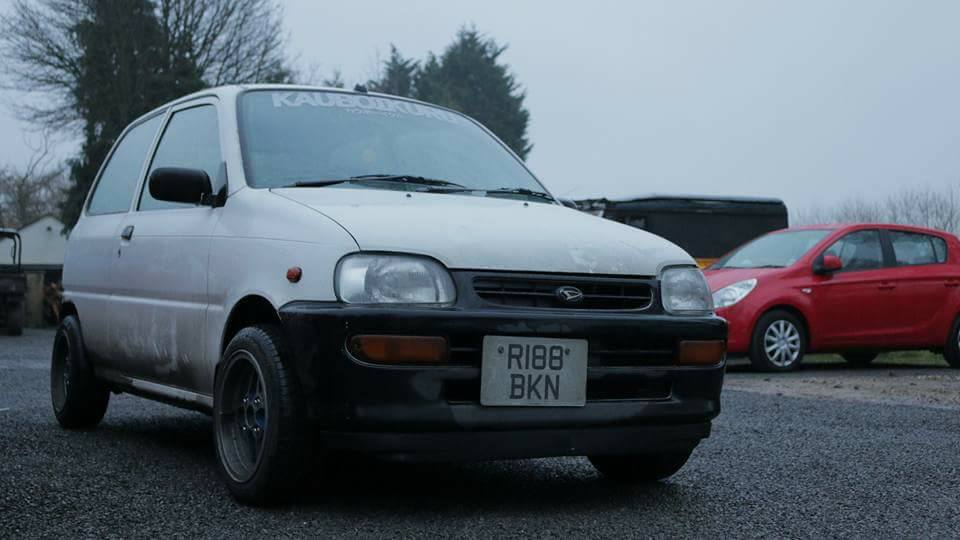 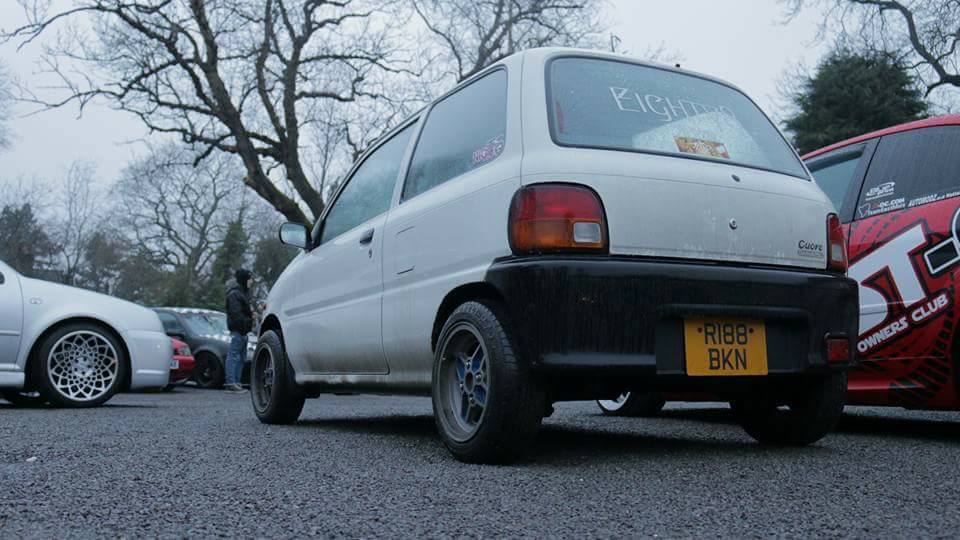 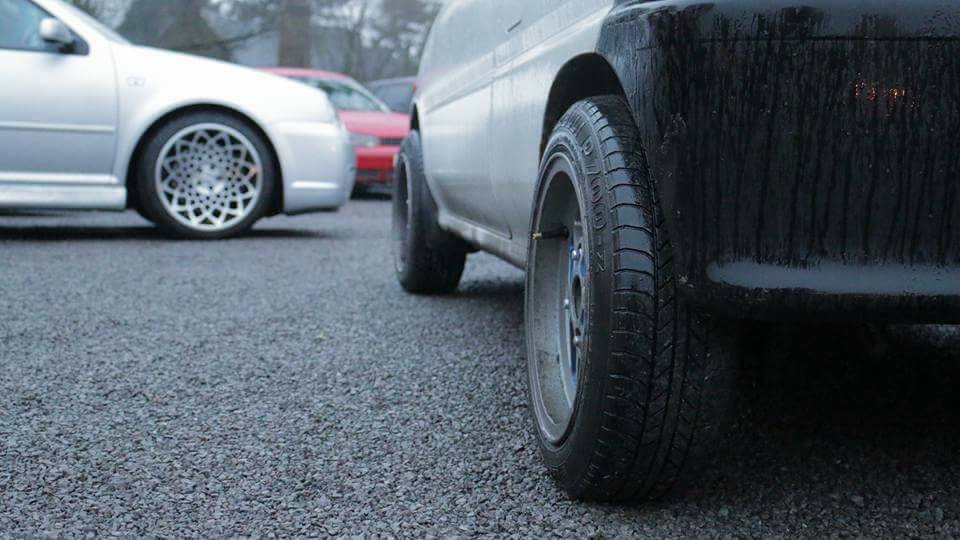 The coilovers are on! and shes low...
I need to do something about the rear arches, as they rub quite alot. And also need to get some Corsa B topmounts as i used the normal Cuore ones and they dont fit properly, for now its fine.
Also Roof/Bike Rack yo...
I took a few pictures of the process you have to do to put Corsa B front coilovers on the front of the car if anyones interested ill add them on here. 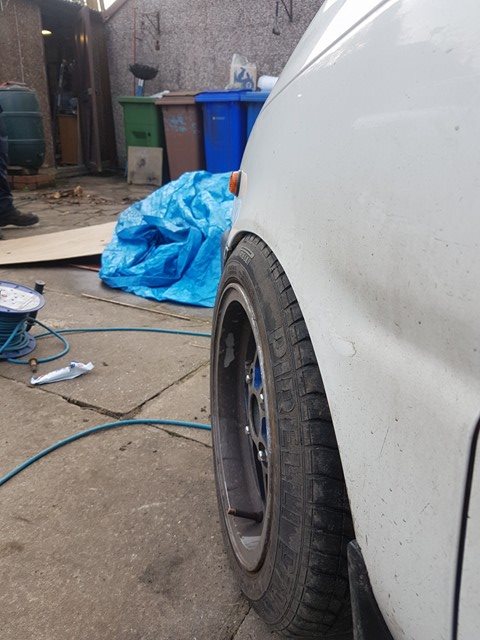 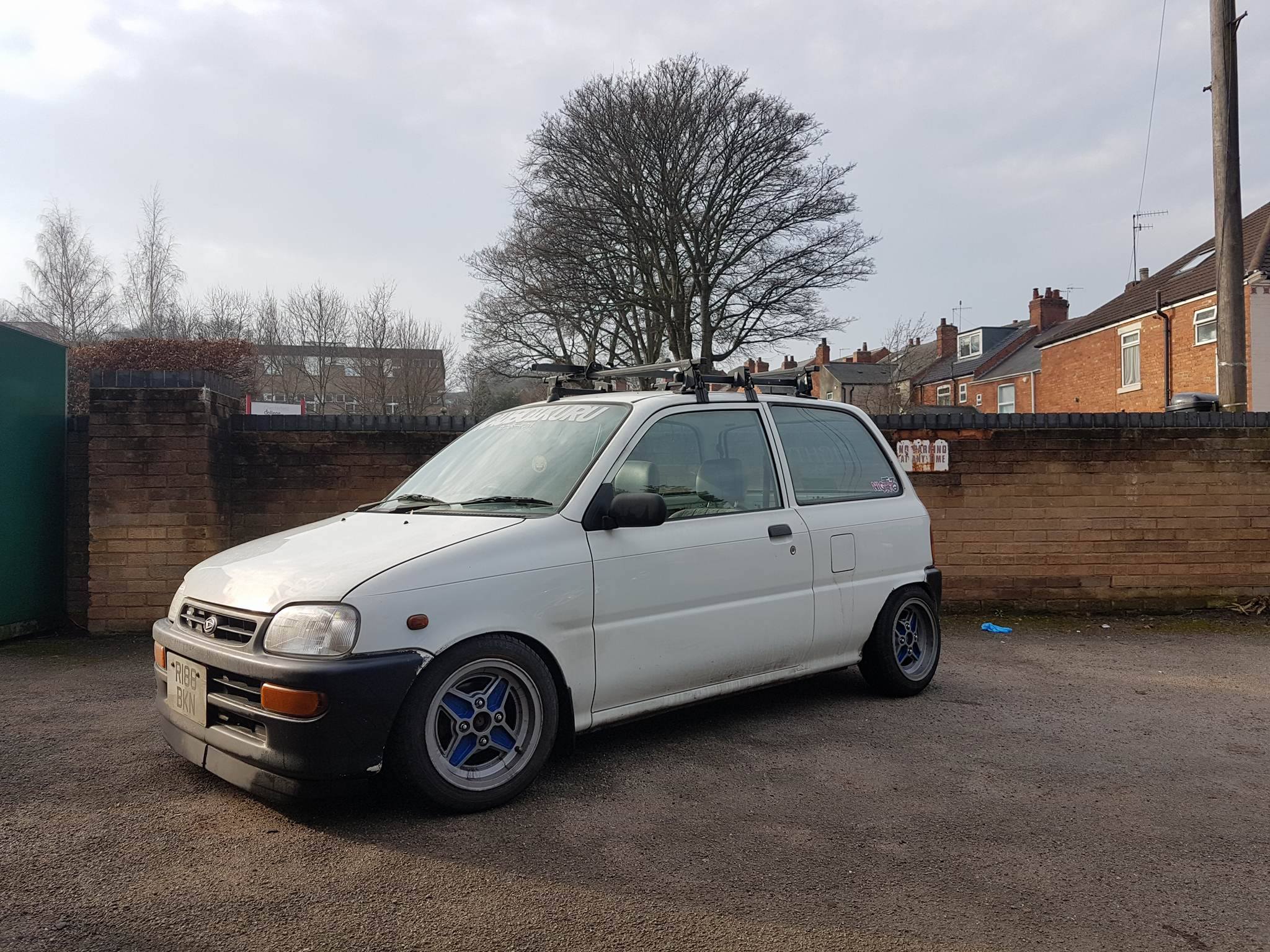 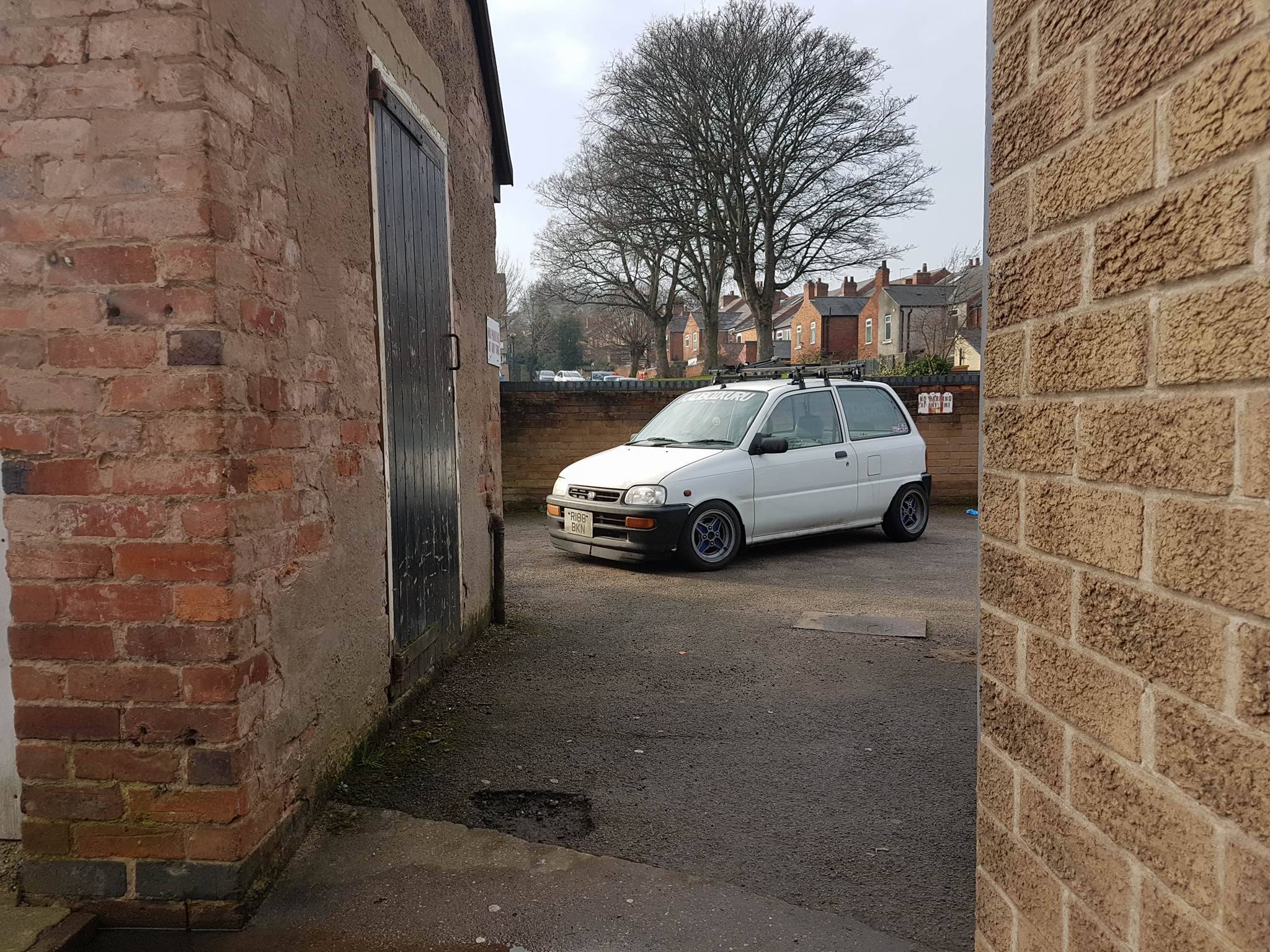 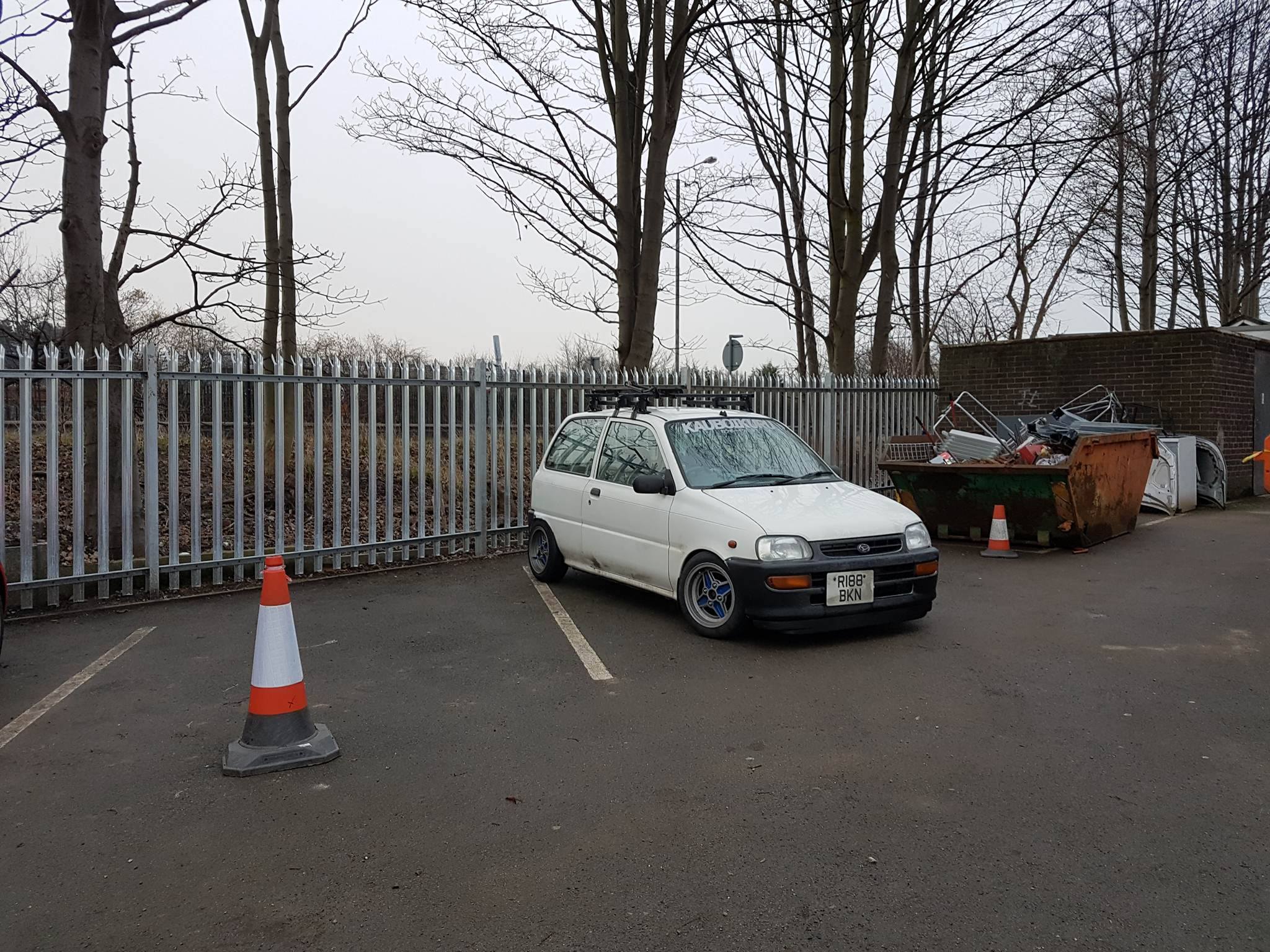 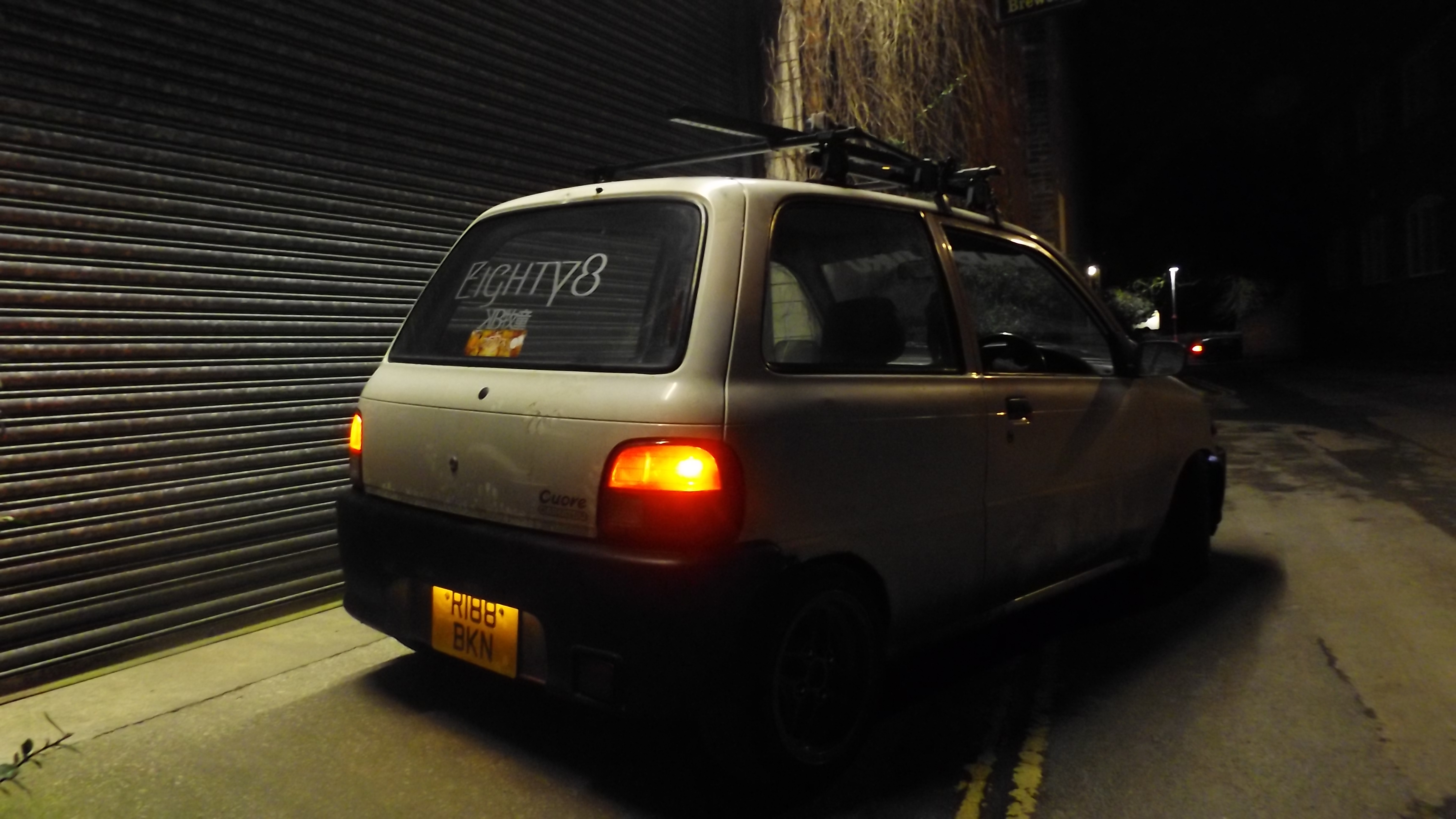 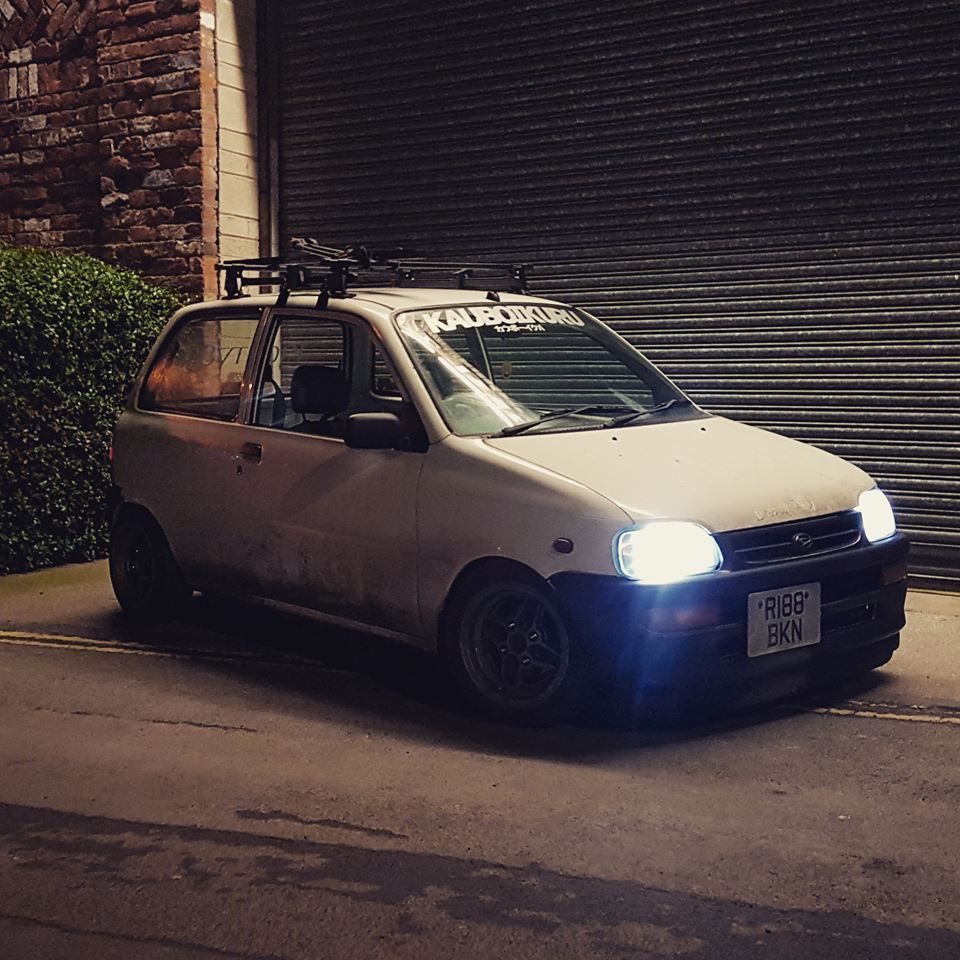 Looks like it could do with some of those bolt on arch extensions!

What's the lip spoiler from? It's a really nice fit.

Looks like it could do with some of those bolt on arch extensions!

What's the lip spoiler from? It's a really nice fit.
I might get some arches ... not sure yet, And its off a mk3 golf, i only put it on temporarily. Ive got other plans!